It’s rare that all 16 games in the NFL are played on the same day — thanks to the holidays.

Only one division title out of eight is still up for grabs with New Orleans and Carolina fighting it out in the NFC South for a playoff home game.

The Saints play the Bucs in Tampa, while the Panthers collide with the Falcons in Atlanta. This game is just as meaningful to the defending NFC champs as a loss could knock them right out of the playoff picture. Carolina and Atlanta are both 3-2 in divisional games.

The final week of the season will have many sports players scratching their heads as teams that have already clinched playoff spots — like Kansas City and the Los Angeles Rams — may not play their full lineup. But those are often game time decisions, making it difficult to parlay teams in advance.

NFL’s Hottest Team Is Not In The Playoffs

Go ahead, try and name the hottest team in the league.

The Kansas City Chiefs, winners of three straight? No, but those wins helped the team seal the AFC West title.

The Carolina Panthers, also winners of three straight? Nice try, but their victories have gained the team from Charlotte at least a wild card spot.

The San Francisco 49ers? There you go. Jimmy Garoppolo’s team was 1-10 before the former New England Patriot joined his new club in a trade. The 26-year-old has completed almost 70 per cent of his passes, with five touchdowns and close to a 100 quarterback rating as the 49ers have won four in a row. It looks like San Fran has found its franchise QB.

In other news around the NFL: 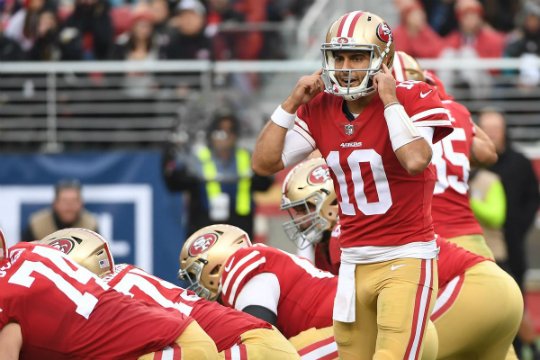