The New England Patriots and Pittsburgh Steelers are on a collision course to decide home-field advantage throughout the playoffs.

The two AFC powerhouses meet in Week 15 at Heinz Field. Both division leaders are 6-1 against conference opponents. The Patriots (9-2) are undefeated in five games on the road, while the Steelers (9-2) are 4-1 at home.

They are also two of four teams on huge winning streaks. The Philadelphia Eagles (10-1) haven’t lost since Sept. 17, winning nine straight. The Patriots and Minnesota Vikings (9-2) have won seven straight, while the Steelers have won six in a row.

It’s interesting to note that all four streaking division leaders are on the road this week.

The Patriots remain huge favorites to repeat as Super Bowl champions. Brady and company have been the Vegas pick to win it all every week of the season. The Eagles, who were listed at 50-1 in the preseason, are now less than 4-1 to win the league championship. They have lost the Super Bowl twice — in the 1980 and 2004 seasons.

The Patriots play their first of three games on the road this week in Buffalo against their division rivals. The Eagles spend the next two weeks on the road as well, but their games are against division leaders — against Seattle this week and the Los Angeles Rams in Week 14.

Some other notes from around the league: 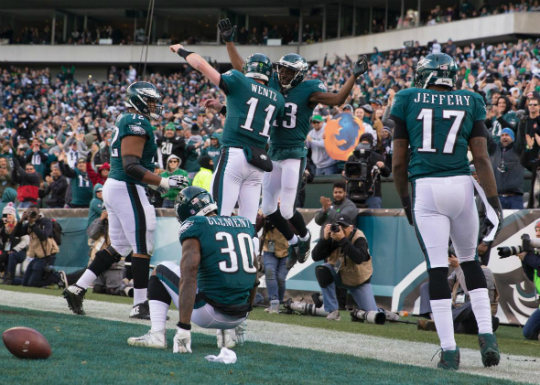