The Redskins, who play the New York Giants (2-8), host the night game at 8:30 p.m. ET. Two NFC North leaders meet in the early game at 1 p.m. as Minnesota travels to Detroit. The late afternoon game (4:30 p.m.) features the Los Angeles Chargers at Dallas.

Eight of Washington’s 10 games have come against teams with a winning record. The Redskins have only been favored once this year and they are 2-3 at home and 4-6 against the spread.

The Giants have had a year to forget. Many experts picked them to compete for the NFC East title before the start of the season. They’ve been favored three times this season and lost all three. New York is 1-4 on road and has been outscored 115-57 in their last four games.

There are no more bye weeks during the regular season. All 32 teams are back in action this week.

Five teams have separated themselves as Super Bowl contenders — two in the AFC and three in the NFC.

The New England Patriots, winners of six straight, are the current favorites to repeat as league champions at just over 3-1. They have outscored their opponents 163-75 during that streak and look to improve to 9-2 this weekend as 17-point favorites over the hapless Miami Dolphins.

The Pittsburgh Steelers are the other AFC powerhouse. Winners of five in a row, they are also huge favorites this weekend. The Steelers square off against the Green Bay Packers in what would have been a classic matchup if Aaron Rodgers was healthy for the Pack. The Steelers are listed at 6-1 to win the Super Bowl and they host the Patriots on Dec. 17 in a game that could decide home-field advantage throughout the playoffs.

The Philadelphia Eagles, 7-9 last season, are the team to beat in the NFC. They are now at season low odds of 4-1 to win the big game. Here’s another division leader that’s a huge favorite this weekend — the Eagles are picked to win by two touchdowns over the Chicago Bears.

Two teams with mediocre records last season — the Minnesota Vikings and New Orleans Saints — are the other two teams in the NFC listed among the top five to win it all. 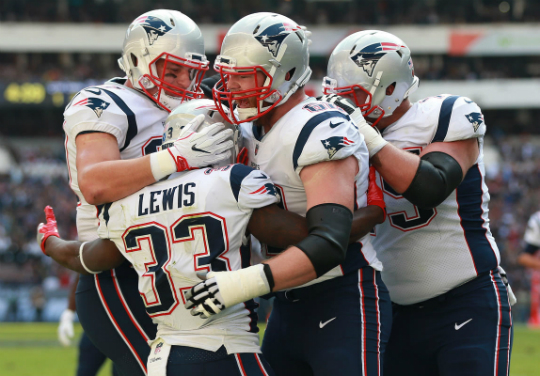