Let’s take a look at the early 2020 NFL Draft odds for the first overall pick:

The Pick Is In

LSU quarterback Joe Burrow (-1200) is the overwhelming favorite to be selected first overall in the NFL Draft, which will be held on the iconic Las Vegas Strip on April 23-25 (Vegas odds NFL Draft 2020 provided by Bovada).

Hundreds of thousands of football fans are expected to experience the draft like it’s never been showcased before on the world-famous section of Las Vegas Boulevard. While most of the glitzy draft activities will be centered around the Caesars Palace property, the top picks will make a grand entrance on the red carpet at the Bellagio fountains — exploding water cannons and all.

Many believe Ohio State defensive end Chase Young (+600) is the best player available in this year’s draft, but he’s unlikely to be picked at No. 1 because NFL teams covet quarterbacks over every other position.

Georgia offensive lineman Andrew Thomas (+1400) is ranked third in the NFL Draft odds 2020 and widely considered to be the top blocker in the country. Quarterbacks Justin Herbert (+1600) of Oregon and Tua Tagovailoa (+2200) of Alabama round out the Top 5 on the betting boards.

These odds are fixed if you make your draft bets now at any top-ranked online site. But punters should look for a slew of prop bets as the event date draws closer, including if a player will be picked in an exact spot in a certain round or which player will be the top pick as his position. 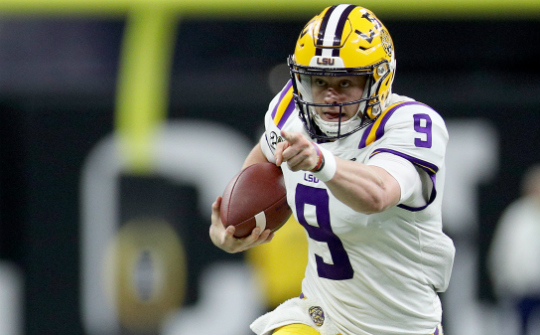 The Cincinnati Bengals, who won just two games last season, hold the top selection in what most are calling the “Joe Burrow Lottery.” The next picks in the first round belonged to the Washington Redskins, Detroit Lions, New York Giants and Miami Dolphins. Let’s take a look at the top prospects and make a pick for the No. 1 overall selection:

The 23-year-old Ohio native led LSU to the national championship last season. He threw for 60 touchdowns and more than 5,600 yards on his way to winning the Heisman Trophy as the best player in college football.

There’s no way the Bengals can take anyone but Burrow, is there? Well, the QB and his camp have been making rumblings about Burrow not wanting to play for the lowly Bengals, so a trade of the top pick to a team like Miami could be in the works.

The San Francisco 49ers hit the jackpot when they took Ohio State defensive star Nick Bosa last season. Bosa’s former teammate could be even better. The Redskins already have a young quarterback, so a player of this caliber can’t be passed up.

The 20-year-old Young racked up 16.5 sacks with forced six fumbles as the Buckeyes made another trip to the CFP Final Four.

Tagovailoa, who suffered a devastating hip injury in November, is the wild card in the draft. Is he healthy now? Is he injury prone? There may not be definitive answers to those questions before the draft, but the NFL values QBs so highly that one team will definitely take a chance on this 21-year-old talent.

The left-handed quarterback, who was 22-2 in his last two seasons at Alabama, threw for 87 touchdowns against 11 interceptions in his career at Tuscaloosa. Too many teams are in need of a franchise QB for Tua to last too long in the first round.

VGB’s No. 1 overall pick — Burrow (-1200). The LSU star will go No. 1, but the biggest question that remains is will it be to Cincinnati, or will the Bengals trade the top pick for a slew of draft picks?