It doesn’t look like a slam dunk for Golden State and Cleveland to meet in the NBA Finals this season — not if Toronto, Boston and Houston have any say in it.

The defending champions from Oakland may have the best record in the league, but no team is hotter than the Rockets, who have won 13 of their last 14 games. Houston is also 2-1 against Golden State this year.

In the East, the Raptors currently hold the No. 1 seed, thanks largely to the NBA’s best record at home (24-4). The Celtics, who are 1-1 against the Raptors this year, have held the top spot for most of the season. The playoffs start in about two months.

With 12 games on tap on Wednesday, let’s try to pick a winner against the spread (ATS) in two of them and cash a winning parlay ticket.

The Eastern Conference rivals have met three times this season, with the Pacers winning them all — by nine at home on opening night, by 12 at the Barclays Center on Dec. 17, and by four at home on Dec. 23.

DeMarre Carroll, who has started the most games for Brooklyn this season, and the Nets should keep this game close at home, but five points doesn’t seem like enough. 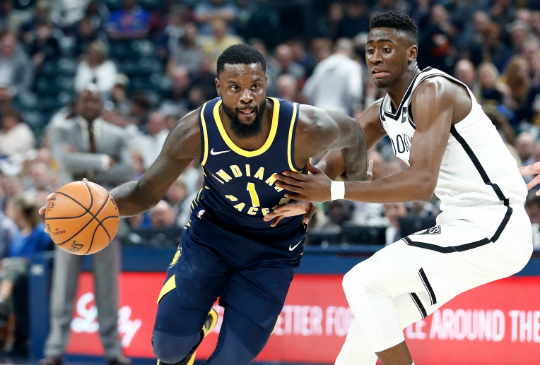 The Jazz (29-28) are also in last place in their division (Northwest) in the Western Conference, but they are 17-9 at home and in the midst of a 10-game winning streak, which includes a 30-point victory over Golden State.

They’re also just a few games out of a playoff spot after beating the No. 3 seed in the West on Monday. Donovan Mitchell scored 25 points to lead Utah at home over San Antonio 101-99.

Devon Booker, with 24.1 points per game, is 12th in the league in scoring, but he is doubtful for this matchup. The Jazz are just too hot to bet against these days anyways.