Before you go betting it all on an underdog to win the NCAA men’s basketball championship, first take a look at these statistics.

March Madness isn’t all about stunning upsets and miraculous finishes. The top teams often go the distance. In 2017, two No. 1 seeds hooked up in the final with North Carolina rallying to beat Gonzaga 71-65. The Tar Heels were favored in the championship by 1.5 points.

The single-elimination event expanded to 65 teams in 2001, with two teams battling for the 64th and final spot. The Big Dance grew again in 2011 to 68 teams, with eight schools fighting for the last four spots (also called the First Four). But all of this growth still hasn’t changed the odds of the top seeds advancing to the final.

What’s it take to win the national championship? Six consecutive victories over 19 days. One bad game and you’re probably done for the season.

Fans are scrambling to fill in their brackets and pick the winner of March Madness. Sports bettors are looking for the lopsided line or the sleeper team that has played with injuries only to get healthy at the perfect time.

It’s tough to bet against the top seeds. They are there for a reason — they’re one of the best teams in the nation.

That said, having all four No. 1s reach the Final Four is very rare. It’s happened just once. In 2008, UCLA, North Carolina, Memphis and Kansas all won their regions with the Jayhawks eventually proving to be the best of them all.

Let’s take a look at the 2017 championship game which the Tar Heels won 71-65 and determine which bets were the winning ones.

If you’re looking to play this year’s final, it’s easy to join an online site — like Bovada, TopBet or Betonline. They offer plenty of betting options on every tournament game. 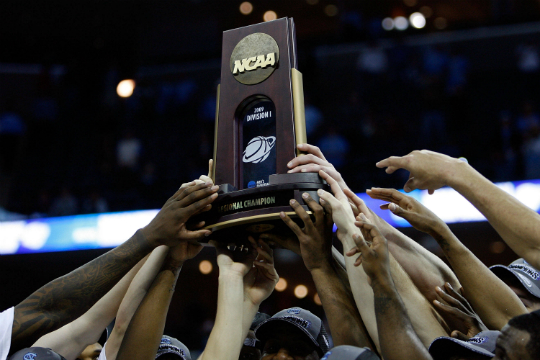 The tournament began in 1939 with eight teams. Today, 68 teams battle for the championship. Each winning university receives a rectangular, gold-plated trophy made of wood.

UCLA holds the record for the most titles with 11. Ten of those championships came during a 12-year stretch from 1964 to 1975.

Kentucky follows with eight, while North Carolina has six. Duke and Indiana have won five each. Connecticut has won four times, including two of the last seven tournaments.

The Tar Heels have won three of the last 13 tournaments and always seem to be among the higher seeds.

Among head coaches, UCLA’s John Wooden is the all-time leader with 10 championships. Duke’s Mike Krzyzewski is second with five titles.

The highest seed to win the championship? No. 8 Villanova stunned the nation when the Wildcats won in 1985. No. 7 Connecticut scored in 2014 and No. 6 Kansas captured the title in 1988.

Top Seed, Defending Champs Ousted Four of the top six ranked teams in the nation are out of the NCAA men’s basketball tournament after the first two rounds, including the top seed in the West in Xavier. The defending champions from North Carolina, the No. 2 seed in this region, were also thrown to the […]

Journey To San Antonio Begins Now March Madness is about to consume the country from coast to coast. The NCAA men’s basketball tournament starts with first-round action on March 15-16 and second-round play on March 17-18. From noon until midnight on those four days, there will be talk of great play, stunning upsets and Cinderella […]

Cavs, Spartans Top Two Teams In Nation The Virginia Cavaliers and Michigan State Spartans continue to wrestle for the top spot in all the polls. The No. 1 Cavaliers (25-2) have the fewest losses of any Division I college basketball team in the nation. The school from Charlottesville, Va., has won 19 of its last […]